A Short Summary of Byssus

Last summer (2015), I was perusing some technical articles on textile archaeology and I came across a reference to Byssus, a fiber also called “Sea Silk” spun from the collagen/keratin complex produced by the Pinna Nobilis, clam.  I found it so intriguing, I began to google everything I could learn about this mysterious fiber with a history of sacred use for over 7,000 years.

What I learned was that Byssus was a sacred art fiber spun from a very particular type of clam, which is now an endangered species.  This most revered, largest and “noble” species of clam is called the Pinna Nobilis and can grow up to 1 meter high, standing straight up on the ocean floor, like in the photo below. This bronzed clam sculpture reached just below my arm pit and was the actual clam. 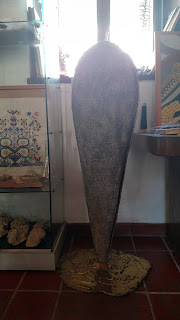 Byssus is exceedingly rare, requiring great dedication to produce a usable fiber.  The arduous process required to refine it was probably one of the reasons it was reserved only for the most sacred applications.  Presumably it was used as the first altar cloth, it was believed to be the material from which the Golden Fleece was made, it was used for robes of Pharaohs, Rabbis, Popes and kings, among other religious artifacts like the Veil of Veronica.  It’s primary captivating qualities are that when held in the sunlight, it gleams like gold and is completely weightless.

In art, Byssus is portrayed as a gossamer veil, as you can see from this piece by the Master of Femalle depicting the Veil of Veronica in 1430.

The Maestro of Byssus

In my research, I learned of “The Maestro of Byssus” – Chiara Vigo, quite possibly the very last woman in the world who knows how to create this magical fiber from clam protein.  Not long after discovering the article, I saw a BBC report on the very same subject and short article also appeared in Vogue Knitting for fiber enthusiasts.

Her protegees told me that people from all over the world contact her to buy Byssus and to get her time, but they protect Chiara Vigo by responding on her behalf to keep the profiteers away.  So I feel very privileged that she responded so immediately to my email, inviting me to be her guest.  I made it very clear that I simply wanted to learn because I knew that money was never to be discussed or near this sacred fiber. 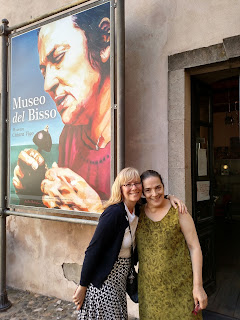 Chiara Vigo descends from 23 generations of women who have served as Maestra of Bisso; their works are priceless and can be found in the Louvre and comparable museums worldwide.  In fact, she was called in by international art conservationists and the Italian government to join a team of textile archaeologists to determine the fiber content of  the Veil of Veronica.  It could be dated, but no one was familiar with the fiber.  It was Byssus, of course. 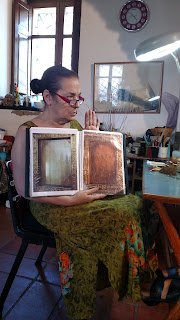 She received a commendation from the Italian Government, is a consultant to the Vatican and is called upon by foreign governments to do the same for textile antiquities.

Maestro’s Commendation from the Vatican 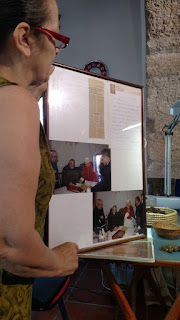 I’ve touched A LOT of fiber over the years.  But never have I ever held 120 gm of fiber in my hand without knowing it.

The Maestro asked me to close my eyes as she placed 120 grams of cleaned and carded Byssus in my palm.  I waited for the longest time to open my eyes because I never felt it touch my hand. I asked her to try the experiment again by turning my hand over, in the event that my palm was not sensitive enough, and sure enough, it was simply weightless and imperceptible; however, over the course of a few moments, I began to feel warmth, and that is the only way I knew I was holding it.

This bit of Byssus was “blonded” in her special secret formula of lemon juice, herbs and oil, so it appeared I was holding strands of gold, which felt like angel hair. 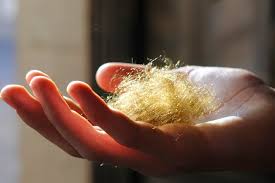 I took this photo from the internet because my eyes were closed during this process. 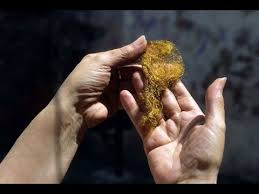 Converting the brownish claim fiber into glistening gold involves processing in natural oils, herbs and lemon juice all accompanied by more than 40 different Aramaic prayers and songs.  The only other colors used are the sacred colors of red and royal purple achieved with fruits and grapes.

Chiara Vigo uses many symbols that have a folk art quality, but are actually based on ancient depictions, like this lion, which has Phoenician qualities.  She brought this piece outdoors to show how the gold gleams in the sunlight, while looking a little coppery brown indoors.  The Lion is her design embroidered in blonded Byssus on handmade, handwoven linen. 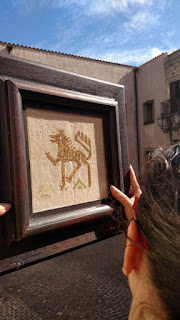 Priceless – Never to be Sold

Collecting, carding, treating & spinning Byssus involves prayer in Aramaic, special songs, specific hand movements, herbs, spices, wine and lemon juice all for spiritual purposes.  There is to be no money exchanged for it.  Byssus can never be sold.

Over the centuries, Byssus has been woven into cloth, and has been used to embroider religious garments for various faiths.  In fact, Chiara Vigo, the Maestro, is a consultant to the Vatican and regularly embroiders the Popes’ names onto their vestments in Byssus. She herself descends from a Judeo-Phoenician line.

Chiara Vigo dives at a highly specific time of year (May-June) when the ocean reaches just a two degree temperature range and ocean salinity is just 4ppt, to harvest just the very top 2-5 cm of the Pinna Nobilis hair.  In one season, this highly labor intensive process yielded about 300 gm of fiber after at least 100 dives, but after carding and cleaning, only 120 gm was usable.  As a result, one of her masterpieces took five years to create.

She created a lovely metaphor about how humans are of the sea and that is why our tears are salty. After she harvests the Byssus, it needs to be soaked every three hours for 25 days, to remove the salt and in that regard, creating something of Byssus for the distraught, the poor and those in need symbolically helps to take away their salty tears.